Why Wait to Teach the Sounds of  Y? 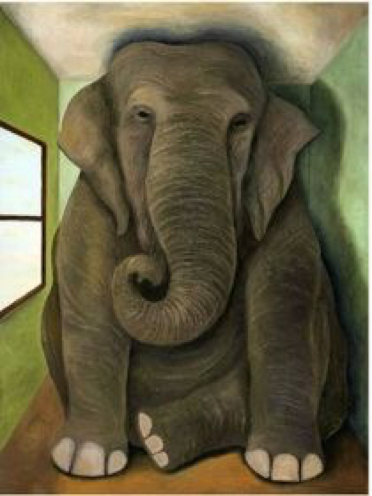 There’s an elephant in your classroom.
And it’s huge.

You sweep by it every day in your classroom, several times in fact, and probably without ever even noticing. It’s most conspicuous during morning calendar time, as that’s its favorite time of day.

If you can’t see, watch this.

So now that you’ve spotted the elephant, it’s time to get rid of it!

Think of Secret Stories® as your “elephant-exterminator!” The Secrets are the logical explanations for letter sound behavior that learners’ brains crave! They are the reasons WHY letters “do what they do” when they don’t do what they should! 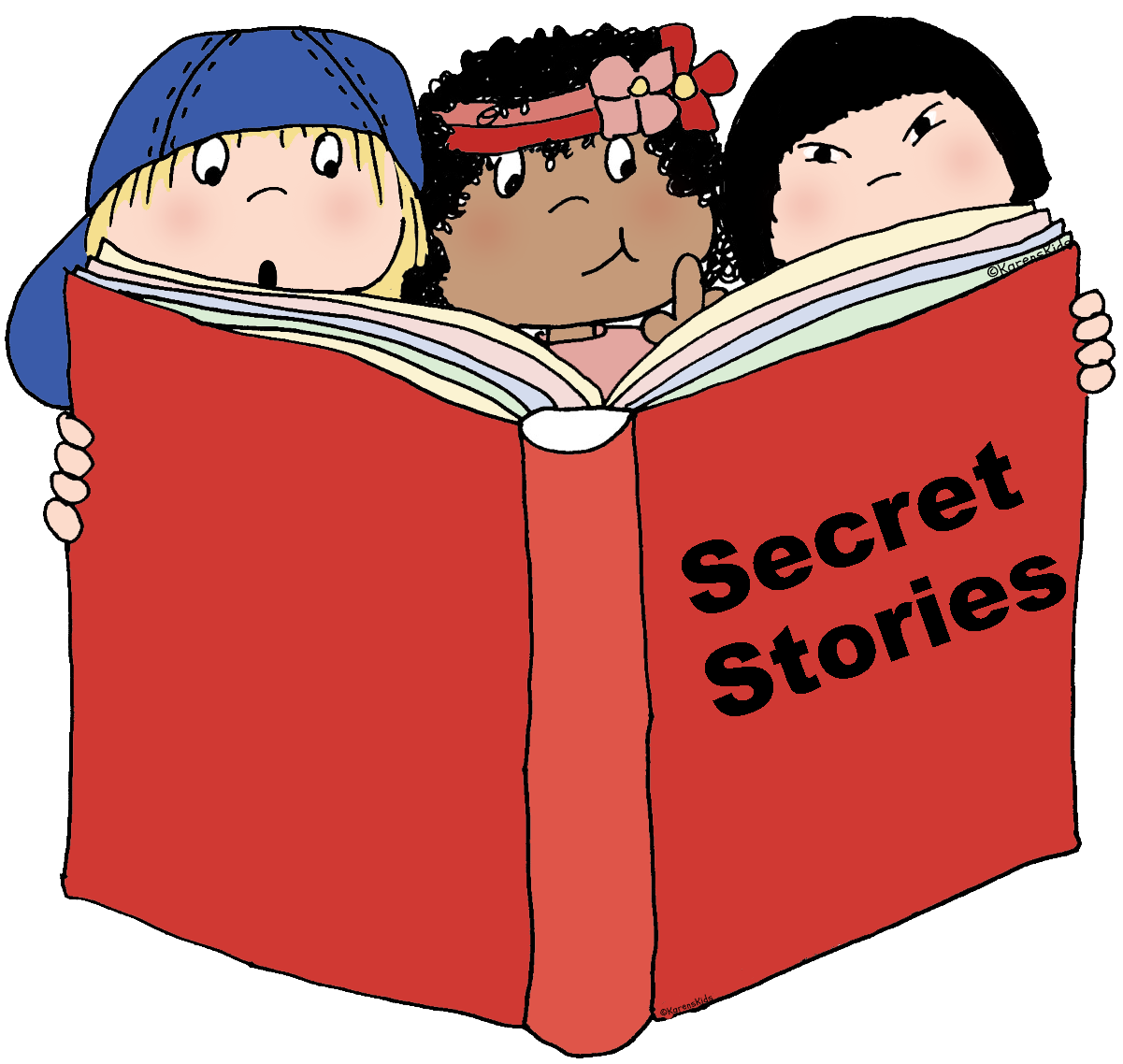 There is perhaps nowhere that elephant exterminator is needed more than on our morning calendar, especially when it comes to the letter Y!

It’s literally everywhere, and not once can it be found making the ONE sound that beginning grade learners are told to expect it to, which is “yuh!” as in: yellow, yes, you and yak.

Instead, it makes different sounds, one that seem belong to other letters, like in the words: January, February, May, July, Monday, Tuesday, Wednesday, Thursday, Friday, Saturday,
Sunday… 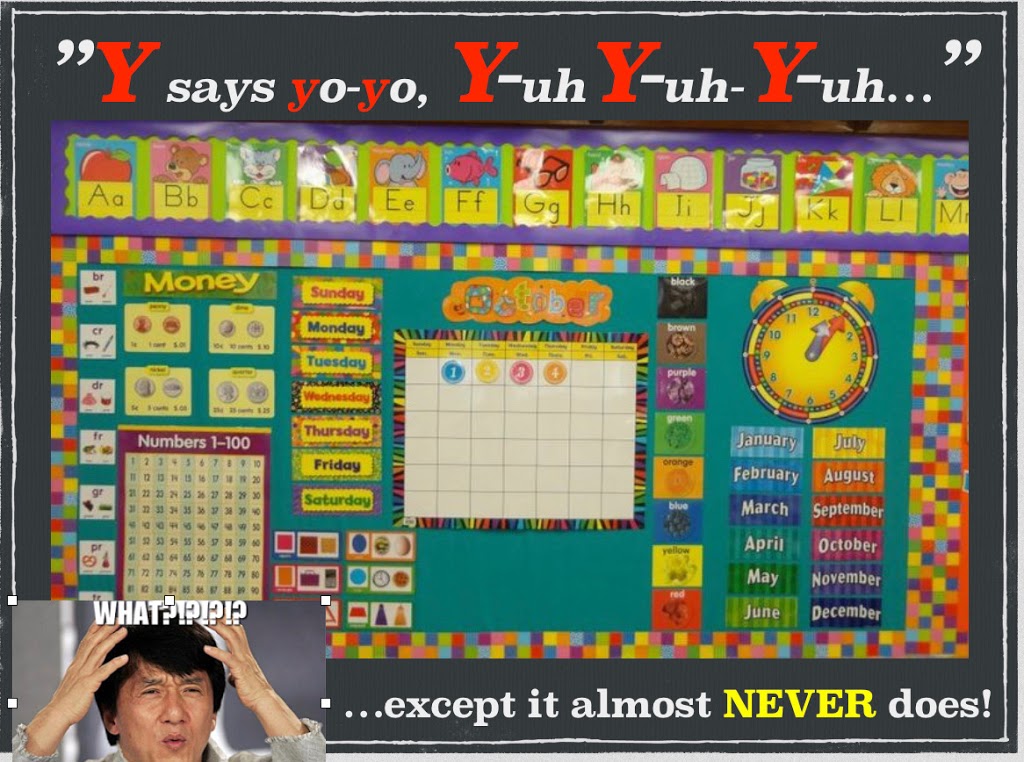 Y is literally everywhere, yet not one time does it ever say, “yuh!”And the classroom calendar isn’t the only place these elephants like to roam.
We can see their tracks on the “boy’s” bathroom and in the books that we read “by” so and so author. They are even hiding in many of our favorite words, like: mommy, daddy, candy, etc…

It seems we have elephants running around everywhere!

When you don’t make sense, it’s time to tell a “Secret!” 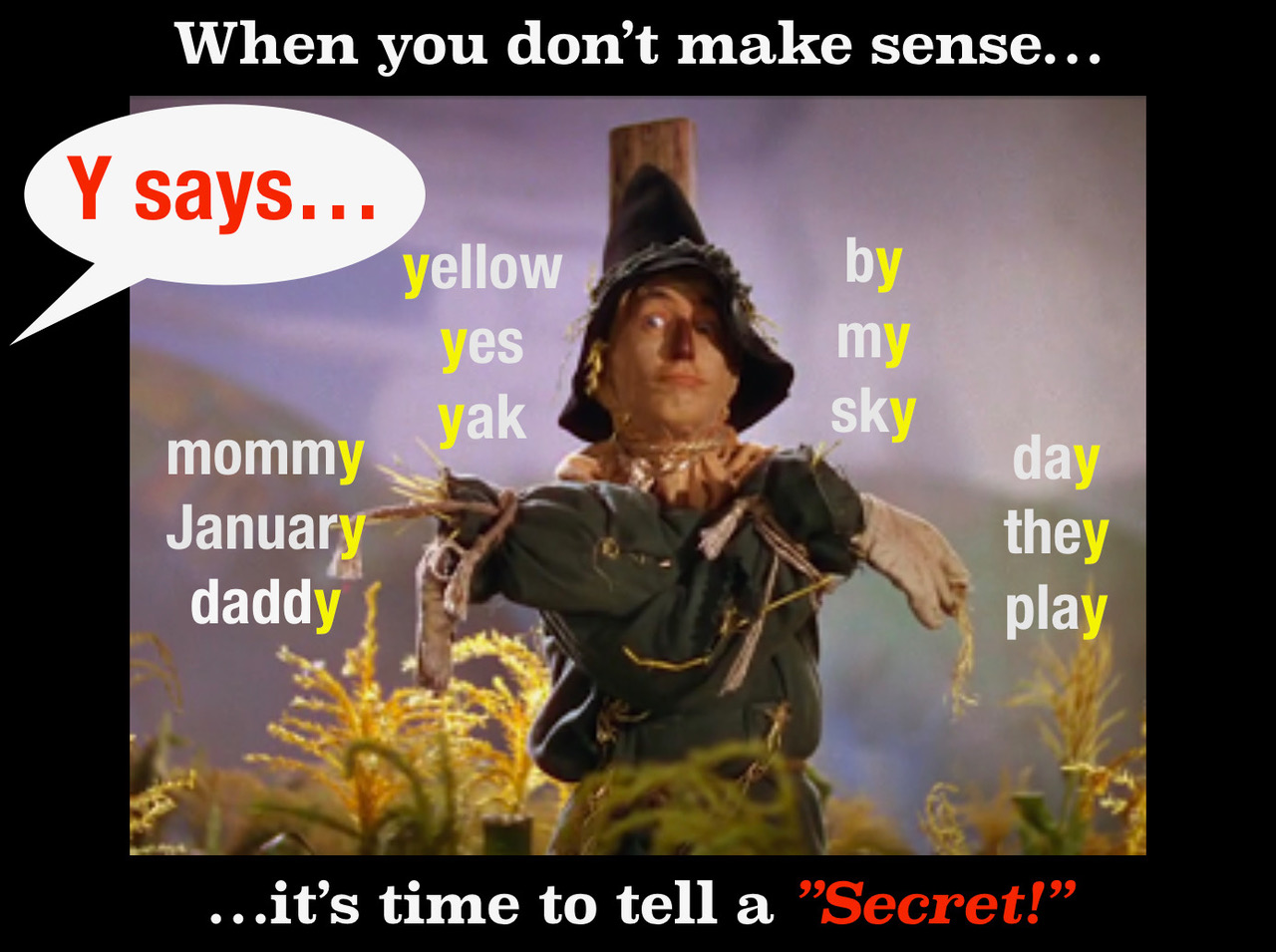 Time to load-up on that “secret” elephant-spray so that we can make the sounds of Y make sense, and in doing so, give kids a much-needed reading and writing tool! (If you want to read more on this “elephant-extermination” process,  read this article.) 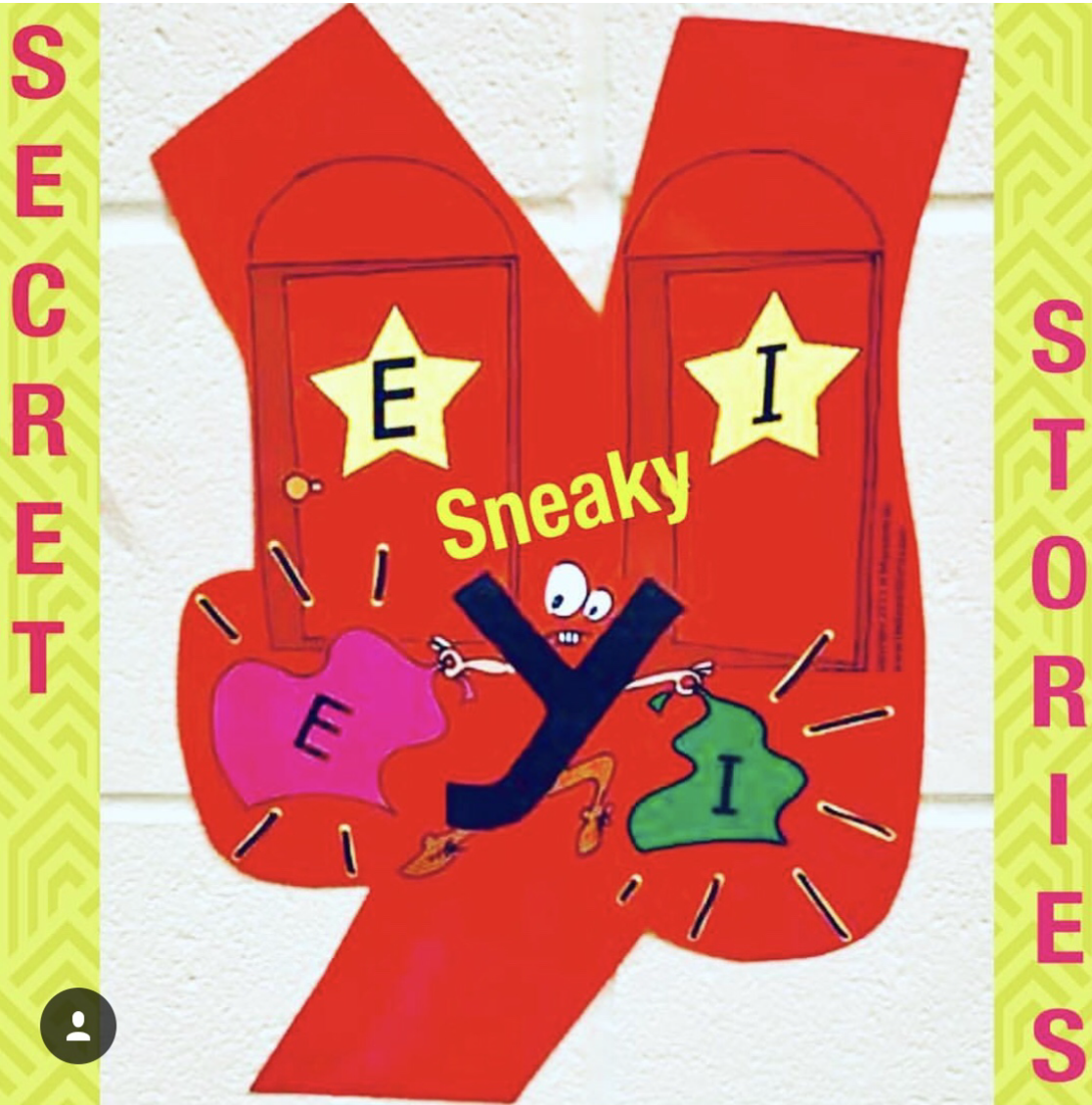 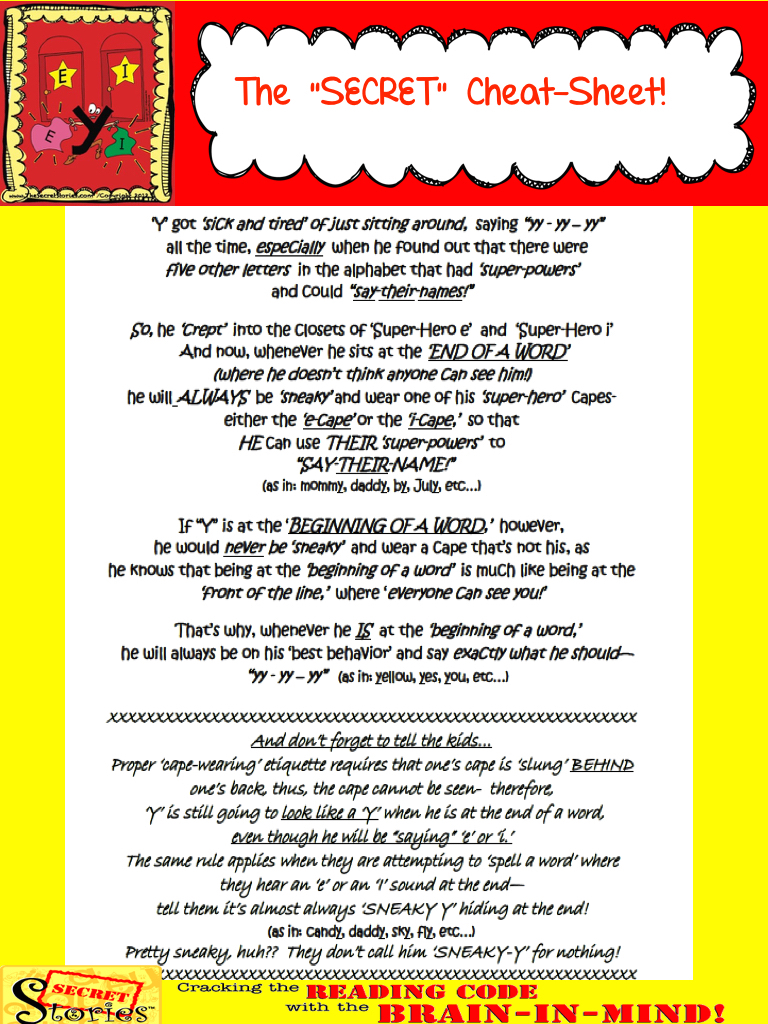 Now that you know about the other sneaky sound that Y makes when he’s at the end of words, like  in Monday or May?” 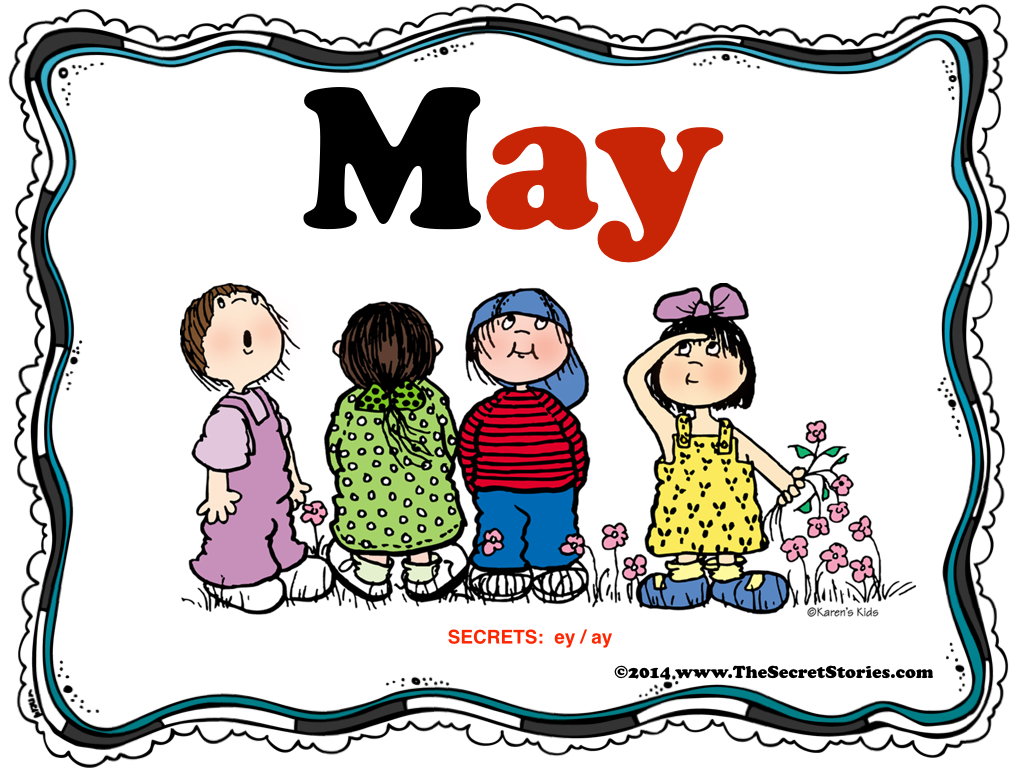 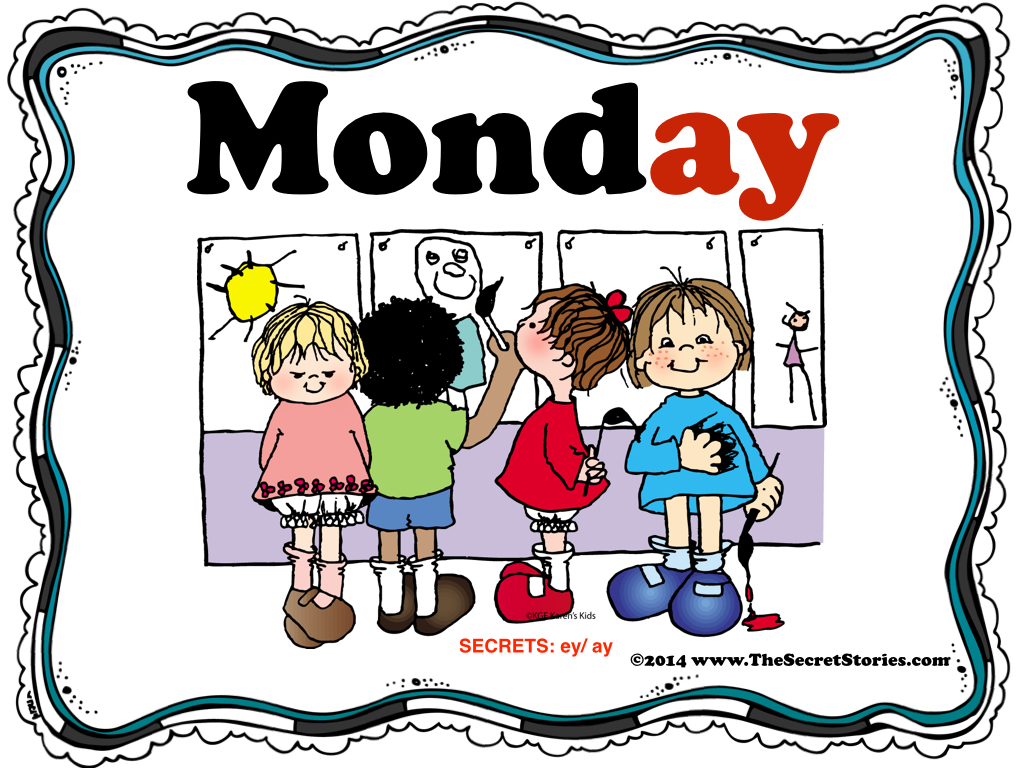 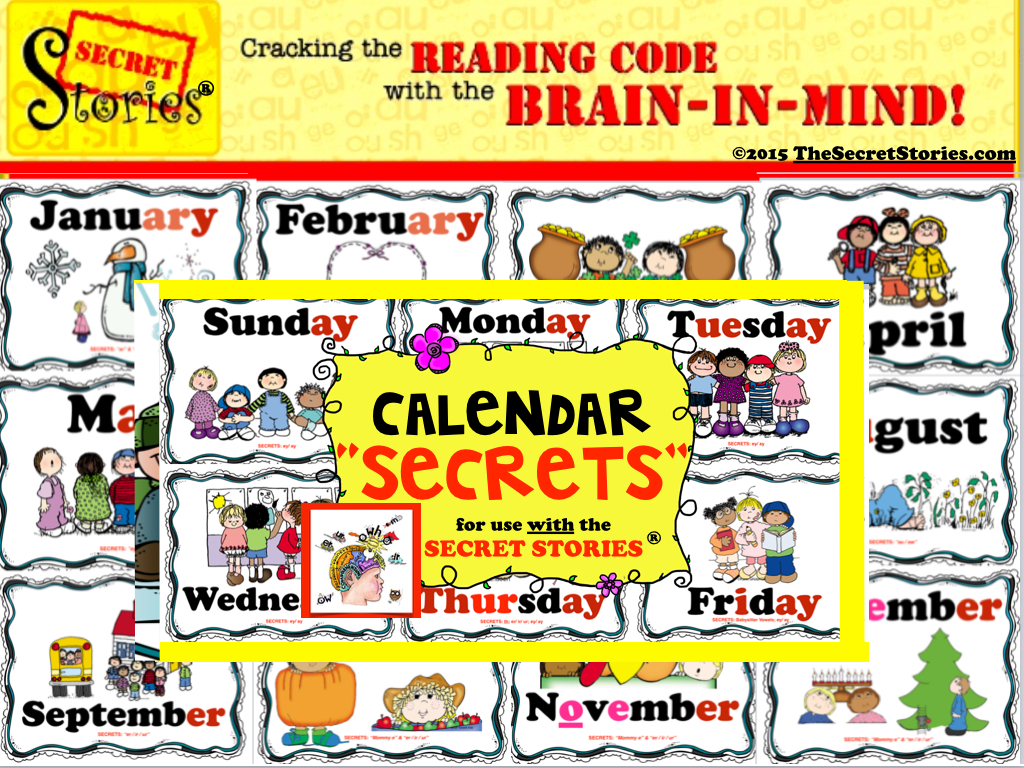 That’s not Sneaky Y®! That’s ey/ay and they are just “too cool”…..like Fonzie!  (And for those who are too young to remember who Fonzie is, this video clip should help!)
For more vids like this one, subscribe free to the Secret Stories® YouTube Channel.

And now, there is a “new and improved” elephant spray in the form of a power-packed guided reader that’s all about Sneaky Y® and his sneaky shenanigans! It’s called Sneaky Y’s Secret and it explains how Sneaky Y® got to be so sneaky! (Special thanks to Susan Eklove for the adorable text and Poco & Pop for the beautiful illustrations!) 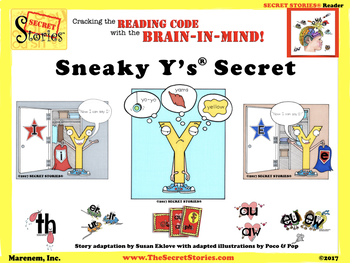 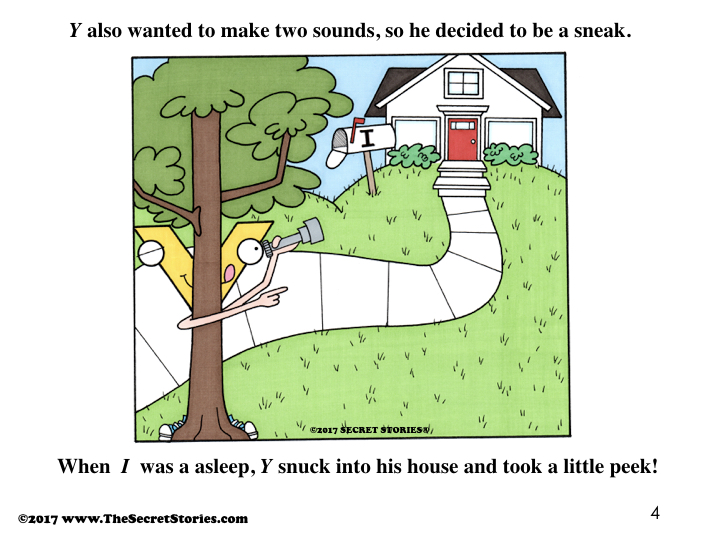 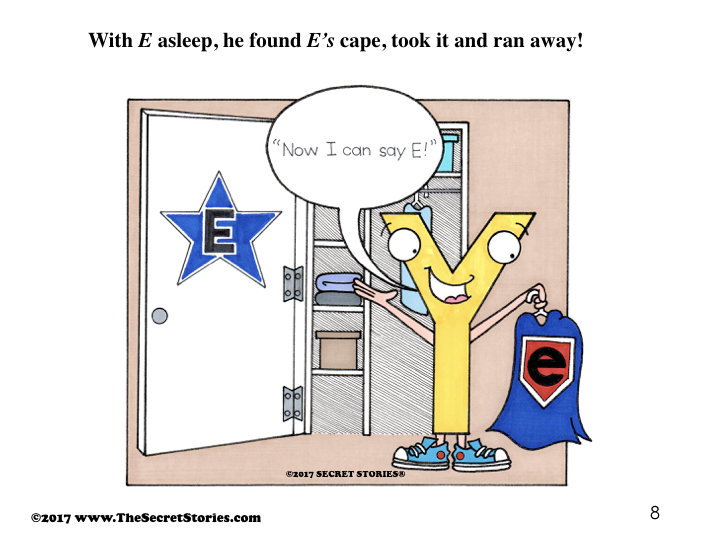 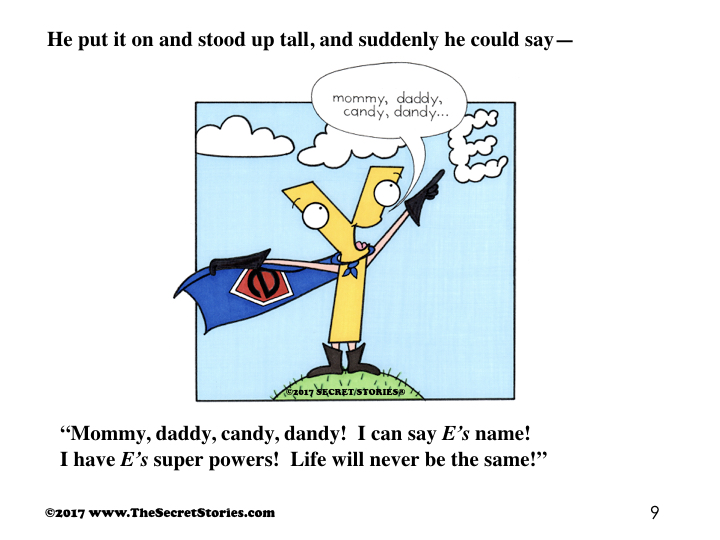 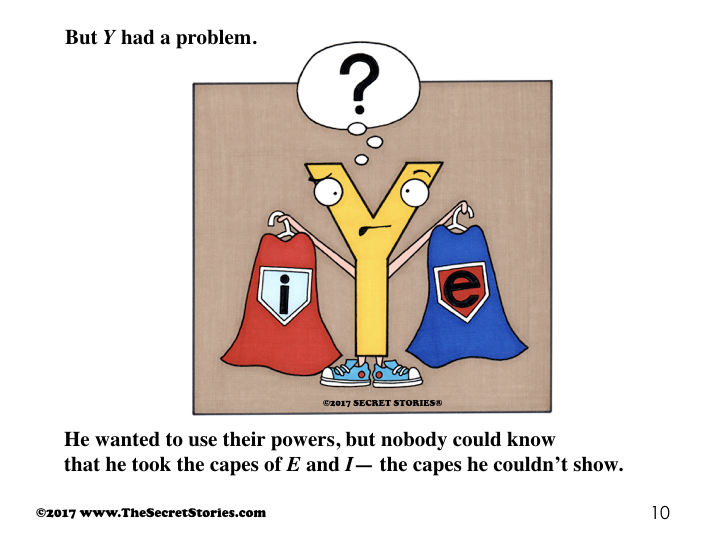 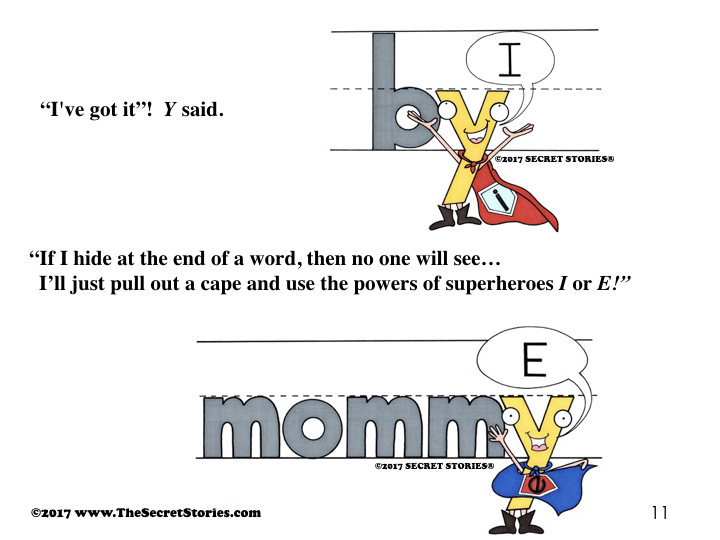 If you are subscribed to the Secret News Blast, you should have already received a free download link for the Sneaky Y® Guided Reader in your email. If not ,subscribe now and never miss a Secret!

In closing, remember this “cool dude” from the video up above? 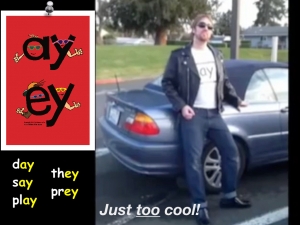 He’s not really Fonzie, but a kindergarten teacher from Washington State, and I he’d sent me the following email, along with that adorable video clip….
My name is Daniel and I teach kindergarten in Washington State. Last year my school district adopted a new reading curriculum and when my team examined the leveled readers before the start of the school year, we were initially in shock.  We had no idea how our students were expected to read the new complex text introduced so early in the curriculum. After our initial reaction started to subside we got very motivated to create and find innovating and engaging methods for teaching more advanced phonics skills.
Around November I stumbled across a pin on Pinterest with the Secret Story posters for the R-controlled vowels, etc… I had seen it before and I thought it was a neat idea, but I had never clicked on the link. When I clicked on it and found your website and realized the scope of how many secret stories there were, I got really excited and shared it with my teaching partners who shared in my enthusiasm. They were the perfect solution to our problem! We made up a few secret stories on our own before convincing our school to purchase them for our grade level, but by January we had them and made the full commitment to implement them.
By the end of the year, we had by far the most students reading the Beyond Leveled Readers in the district, and many students needed even more challenging text.  By the summer I started presenting about the Secret Stories to other teachers in my district and adjacent ones, and ever since I have been trying to share this amazing resource with as many teachers as I can.
After last year’s success, we wanted to step it up a notch this year, so we decided to create a video where we acted out every Secret Story.  It took us 2 months to complete, but we are proud of the result. We’ve had our students watch it many times and they are making even more connections to the stories.  Sometimes it is a gesture that one of us did that resonates with them, or remembering who acted out the story that helps the students remember the sound.  It has proven to have been a very useful project and new resource.
We had a lot of fun doing it, and we would be honored if you had some time in your schedule to watch it. Thank you so much for this amazing resource and inspiring us to want to be the best reading teachers for our students as possible!
Daniel M.
Kindergarten Teacher 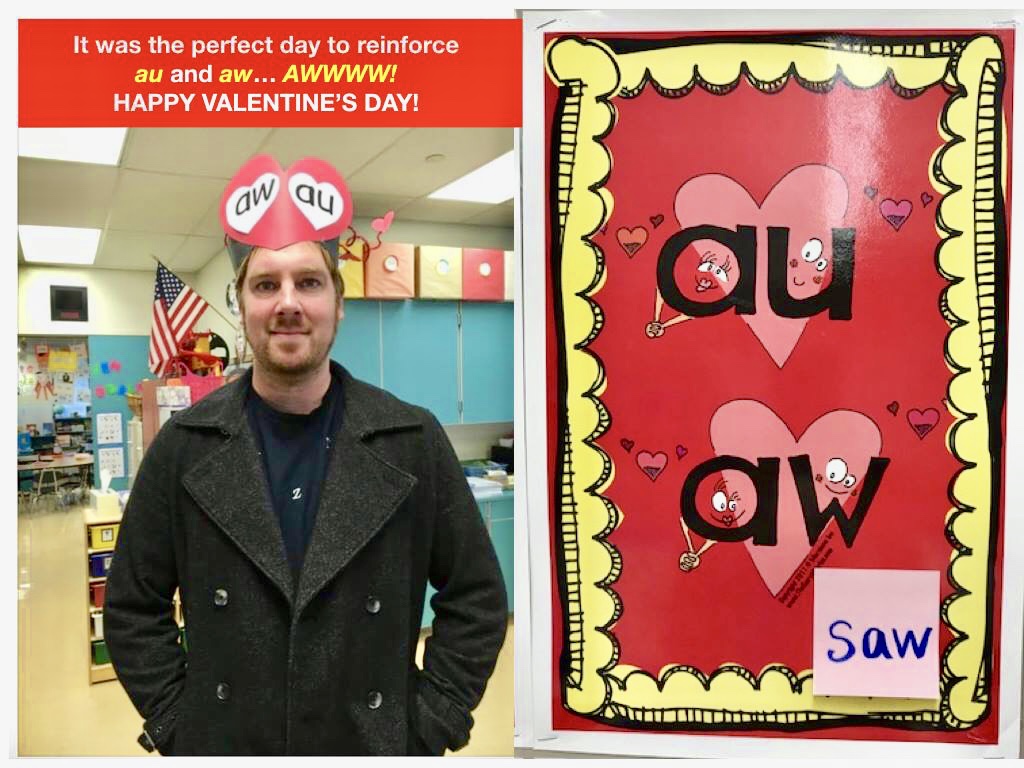 Katie
PS The registration deadline for the week-long South Dakota Kindergarten Academy this summer is fast approaching, and the preK/Kinder days have sold out. For all those who were unable to get into the PK/K workshop, you are encouraged to sign up for the 1st/2nd grade workshop, as the strategies and content covered in both sessions are applicable across the primary grade levels! 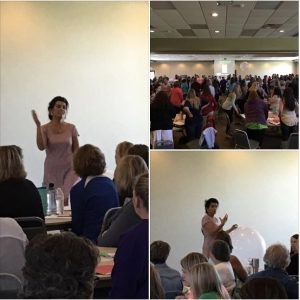 For more information on how to register, visit the Kindergarten Academy Facebook Page or email sac.kindergartenacademy@k12.sd.us. 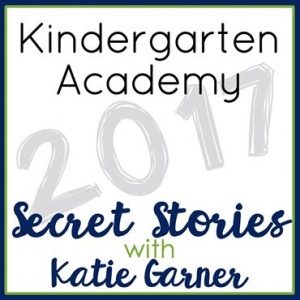 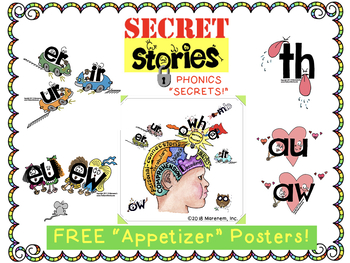 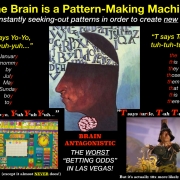 Breaking Down the Grade Level Walls of Traditional Phonics Instruction

The Aha! Moment of Teaching