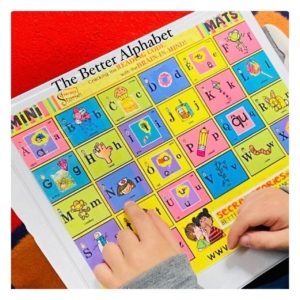 The Best is Yet to Come – Part 2
A guest post by kindergarten teacher, Sheryl Nicholson.
*Note: Sheryl uses Secret Stories to support science of reading-based instruction alongside the Wonders Reading Curriculum.

If you read my first blog post, you know that I didn’t discover Secret Stories and start using them until the final weeks of kindergarten after a tumultuous year of Covid. While I documented my journey using the Secrets in those last few weeks of kindergarten, I wanted to write a second post about how to start from the beginning of the year on Day 1. This is that post, and I hope it’s helpful!

I do this because it’s the fastest way to ensure that kids know all the letter names and sounds in about two weeks to two months. And I don’t mean one sound per letter, but EVERY POSSIBLE SOUND a letter can make when it’s by itself, including the long AND short vowel sounds, the hard AND soft sounds for /c/ and /g/ and even the three sounds of /y/, not to mention in the “most likely” order for the most successful word attack! But it doesn’t “teach” them. It “gives” them.

The reason I say that the Better Alphabet™ Song “gives” the sounds rather than teaches them is because unlike traditional alphabet songs or practice, it doesn’t rely on what are often “underdeveloped” cognitive processing centers with learners having to “remember” the letters and sounds. Instead, it uses earlier-developing muscle memory to forge the connections between the letter names and sounds for automatic and non-conscious sound retrieval, via the mouth muscles. (Katie Garner explains more about this in the video below, as well as how she uses the neuroscience to “cheat” (get around) the traditional limitations of information retrieved through muscle memory.

On a side note, I always make sure to them the “secret” about the Superhero Vowels® with their “short & lazy” disguises AND about Sneaky Y® who’s basically the “Lex Luther” of the alphabet! This is necessary in order to prompt those sounds when we sing them.

The Better Alphabet™ Song is the first track on the music download that comes with the Secret Stories Kit. (There’s a code on the inside back cover of the book to download all of the musical “sound-skill” exercises.)  There is also a video version of the song on TpT, but I just use the audio version or sing it a cappella (without music) with my kids.

In addition to the Better Alphabet™ anchor posters, each student has their own individual Better Alphabet™ mat (pictured at the top) that they keep in the back of their writer’s notebook. They bring it to the carpet every time we do the Better Alphabet. As Katie explains in the video, it’s absolutely critical that kids SEE the letters when SINGING their sounds, as this is what forges them together in the brain for use when reading and writing. We do this with “eye-glue,” which means that we keep our eyes glued to the letter as we sing its sound(s).

This video isn’t of my class, but was on Youtube. It’s actually a prek class, but I loved the little girl pointing up during the song to focus everyone’s attention on the alphabet anchors, as it shows the kids know how important “eye-glue” is! I also love the letter sound assessment immediately following it!

Forging “Sound-Symbol” Connections in the Brain

As an incentive, I give an award to one student who has the best “eye glue” and “muscle mouth” (which means that they are really working their lips, tongue and teeth” to engage muscle memory!).

I give the smaller bookmark-size award during the week (two a day, once each time we sing it) and then every Friday, I give out the large award for “Best of the Week!”  You don’t have to give actual awards, as you can also make it an ongoing contest, with “boys against girls” or even between different table groups. Whichever group wins can earn small privileges, like getting to line up first or pick recess equipment first, etc… 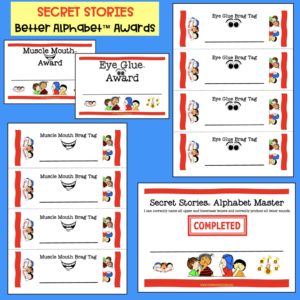 I do this everyday until my students have all reached 100% mastery of the letters and sounds. This usually takes between two weeks and two months. After a couple of weeks, I add the “Letter Runs” which you can hear us sing through in the videos below, as those are the next tracks of musical exercises in the music download.

And check out the video below where kids are singing the Letter Runs to the tune of Star Wars!

Using Music to Support Orthographic Mapping of in the Brain

Whereas the Better Alphabet® instills fast mastery over both the letter names and sounds, the Letter Runs “raise the bar” by skipping the letter name and requiring fast recall of the sounds so as to mimic actual decoding for reading (i.e. see the letter and make the sound). Letter Runs can be sung fast OR slow and to ANY tune! They can even be sung backwards!

According to Katie, the purpose of the Letter Runs and the other musical exercises on the download (aside from the Better Alphabet) is to actually avoid activating muscle memory by constantly switching-up the speed, tune and order. This forces kids to “actively manipulate” the sound-symbol connections in ANY order, just as they must do when using them to read and write.

So, at about the two week mark, we started following up the Better Alphabet™ Song with the Letter Runs as fun challenge, still making sure to use our “eye glue” and “muscle mouths!” The great thing about starting the Letter Runs BEFORE kids have 100% mastery of all the letters and sounds is that they love the challenge! They don’t fret about the letters they don’t know, they just love singing through the ones that they do as fast as they are able! Even the kids who know only a handful of letters still beg to sing it over and over again. It’s just such a great way to build automaticity of the sounds they DO know so that they can start USING them to read and write!

By spring break, the kids are able to do the Letter Runs in ANY order… forward, backward, or completely random….just like in REAL words! They can handle anything I can throw at them because the letters and sounds are so solidly forged in their memory (aka “orthographically mapped” in their brain!)

The above-described routine is NON-NEGOTIABLE and we do it every single day without fail! And simultaneously, we are also learning about the “grown-up” reading and writing Secrets, which are the sounds that letters make when they get together and DON’T do what they should! All of our Secret Stories® posters are up on Day 1 and ready for use whenever and wherever we need them!

And we definitely need them! We find Secrets everywhere…in student names, on the calendar, in our required sight word lists, on our math directions, in stories and poems that we read, even the lunch menu! (To read more about how we do this and what it looks like, click here to read my previous post.)

“A to Z in Three” – August, September & October

We also do something called A to Z in Three. First, we spend the first 26 days of school doing a quick “letter a day” spotlight. This quick overview helps lay the foundation for more intensive study of the letters over the next couple of months. Even though many students will have already acquired the letter names and sounds by the first month by singing the Better Alphabet™ Song twice a day, they still need to be able to write them, and that requires fine motor control.

Working in ABC order, we brainstorm things that began with the sound of our focus letter and draw them on the page. The we practice writing the letter, with kids who know more letters able to use them to try and write the words to go with their pictures. We use simple pages like the ones below, as well as pages in our Decoding Dictionaries, which are in the Decoding Sight Words with Phonics Secrets pack that’s on TpT. (In addition to our Better Alphabet Mats, we also keep Porta-Pics in our writing folder for easy reference to the phonics Secrets. These can be reused over multiple years.) 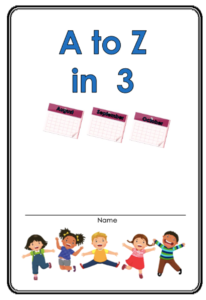 I prep the Decoding Dictionaries for each student before school starts. You can find my post about how I use these here or for a quick overview, you can watch the video below.

The reason it’s so important to fast-track the individual letter sounds is so that kids can start using them alongside the phonics Secrets they know to really read and write and make sense of words wherever they see them! It’s hard to imagine, but in the world of Secret Stories, kids pick up the phonics patterns even easier than they do the individual letter sounds, as they don’t have to go through muscle memory, nor do they have to be practiced twice a day. This is because the Secrets are based on things kids ALREADY know, like sticking your tongue out, riding in a car, playing rough and getting hurt or being sneaky. The minute they hear them, they remember the story and the sound. The only thing they need to apply them to reading and writing are the sound posters, as that is how they keep track of which letters make what sounds. If you doubt how quickly kindergartners can progress into real readers and writers with just the Better Alphabet™ and a handful of phonics Secrets, check out the  video clips below.

There are just so many ways to “play” with these secret building blocks of the code! I encourage you to read my first blog post that explains how we begin incorporating Secret Stories into our daily routines from the very first day of kindergarten. I shared one of my favorites that I do every year with student names in the Secret Stories Facebook Group which you can see in the picture below. If you would like to reach out to me with any questions, you can find me in the Facebook group by clicking the picture above and then on my name at the top of the post. I look forward to continuing the conversation and seeing you in there! 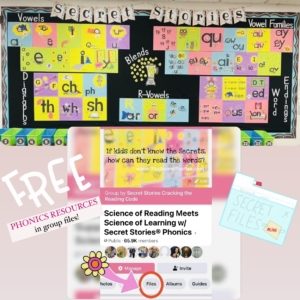