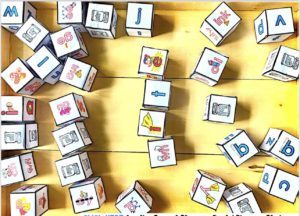 Teaching is not a profession for the weak. It is a profession that you have to feel in your bones and your soul. You have to wake up in the morning and know that you are going to make a difference in a child’s life by getting up and going to work.

A guest post by kindergarten teacher, Sheryl Nicholson
In this post, Sheryl explains how she began using Secret Stories in the last six weeks of kindergarten following Covid. In her second post, she describes starting with the Secrets from the very beginning of the school year on Day 1.

The Best is Yet to Come

Post-Covid Kindergarten in May
In the spring of 2021, after a crazy year of COVID shut-downs, I was preparing my lesson plans for the week and looking for a good YouTube video on blending CVC words because my students were really struggling with this skill, Somehow I clicked on a video of Katie Garner talking about the Secret Stories.

SIX HOURS LATER, I’d binge-watched everything I could get my hands on about the Secret Stories on Katie’s Youtube Channel. In a nutshell, the Secrets are short brain-based stories that explain the sounds letters make when they get together, with posters to help kids remember for independent reading and writing. They make phonics accessible by connecting skills to what kids already know (i.e. having a crush, not getting along, playing rough and getting hurt, being sneaky, listening to your mom or babysitter, etc.).

Everything made so much more sense, including why my students were still struggling with blending simple CVC words. If the only sounds they knew were the ones letters make individually, then CVC words were all they could read, and these words were the least likely to be encountered throughout the day.

That’s because most words we came across contained phonics patterns that we hadn’t learned yet and wouldn’t for at least one or two more grade level years in first and second grade. I was starting to understand why Katie said in the video that it’s actually harder to go slow, especially when we don’t have to.
So with only six weeks left in the school year, I began frantically texting my teammate, and after a little arm-twisting, convinced her to jump in with me and start telling Secrets!

The more I learned about Secret Stories, the more excited I was to get them, and after waiting for what seemed like FOREVER, they came! We immediately laminated the posters and put them all up to make a sound wall that kids could use to help remember the new “secret” sounds they would be learning

I joined the Secret Facebook Group and found so many great ideas from other teachers on how to get started! I even found a cute idea posted in the free group files to create a “secret” cover for the section of my Secret Stories book that contained the Secrets! (There are lots to choose from) 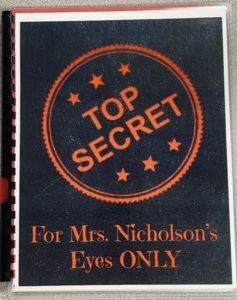 Now we were ready to go!
Granted, we only had about six weeks of school left in the year, but I wanted to see if there was truly “magic” in these Secrets.

Having no clue where to start at the almost END of this school year, I just jumped in. The first “secret” I saw was in our school name, Lovejoy. So, Sneaky Y was the one that we started with, and I made a big deal about it being a grown-up reading “secret” that kids weren’t supposed to know. I even made them go and check the hallway to make sure that no one would hear! Then they all gathered around  on the carpet and I told the secret about WHY /y/ was so sneaky, as well as the sounds he could make. THEY ATE IT UP!!!!  After that one, we literally blew through the rest of the Secrets! They spotted them everywhere—in books, on the walls, in read alouds, at home…there was no escaping them!

The biggest change I saw was in their writing. They went from almost completely “inventive” spelling to using the secret phonics patterns.

Their confidence just soared with these new phonics tools under their belt.  The only downside was the short time we had remaining to use them since our first grade teachers didn’t have them. So before school ended, I made each student a Secret Stories key chain (with the Secret “Take-Home” Tags on Tpt) to review during the summer. 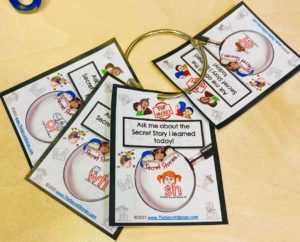 Needless to say, word got around about these things called the “Secrets” and soon the other kindergarten teachers in our district wanted in on the action.  At the end of the school year, we found a foundation that awards grants to teachers through a rigorous proposal process. It’s highly competitive, so in order to stand out, your proposal must be creative. So we decided to incorporate the Secrets into our grant proposal with a mock Zoom call. It was a huge success and we were able to get Secret Stories for all nine kindergarten classrooms at our school!

By the end of that school year, my mind was already racing with ideas for the next school year, and how I could make teaching the Secrets even better for my kindergartners.  I found the Secret Sound Stickers and these were the seeds for a million ideas! 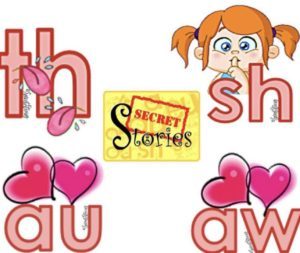 I knew that I wanted to start introducing the Secrets in August, but wasn’t sure how to do that since most of my students wouldn’t even know the names of the letters yet. We could sing the Better Alphabet Song to fast-track mastery of the individual letters and sounds, but in order for kids to actually USE them to read or write anything, they would also need to know the phonics Secrets.

I am a firm believer in teaching smarter, not harder. I thought about the things that I already do and how I could incorporate Secret Stories into them. 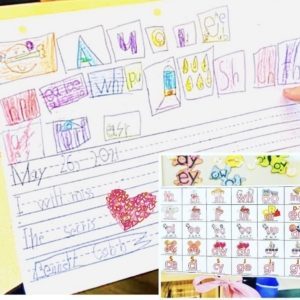 Phonics Secrets in My Name
At the beginning of each school year, I make All About Me posters for each one of my students.  I send a form home at “Meet The Teacher” before school starts that parents and students fill out and return to me.  Then I make a personalized poster for each student and every day we highlight one. 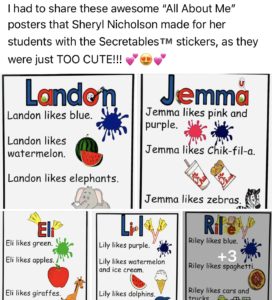 Spotlighting the phonics Secrets in student names is a perfect way to introduce them. Why teach kids how to just “recognize” their names when they can use the Secrets to actually READ them? Not only did knowing the Secrets in their names  help to make sense of the sounds that the letters were making, it was also a personal way for kids to take ownership of the phonics skills.  As different phonics Secrets were introduced, we would add the small red cards (from the back of the Secret Stories book) to our pocket chart to keep track of them. 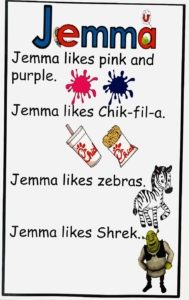 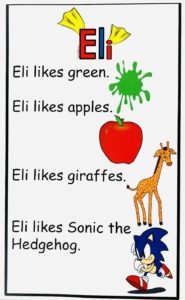 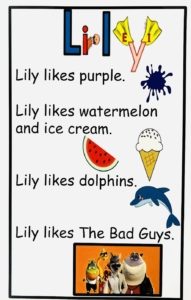 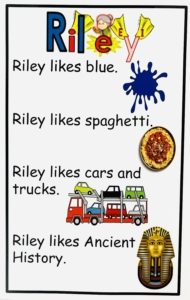 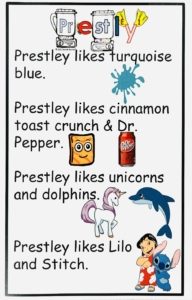 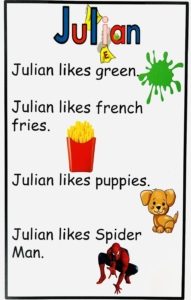 I also made cards for all of the high-frequency “sight” words and used the digital stickers to make the phonics sounds in them more accessible by showing the  connection in a concrete way. 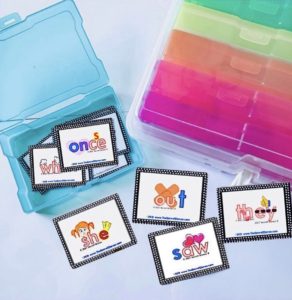 The sound stickers were such a game-changer for my students that I began sharing what I was doing with other teachers in the Secret Facebook Group.  It was there that I discovered that the Decoding Sight Words with Phonics Secrets project was well underway! So at Katie’s request along with Shelley Mahn, we created a teaching tool to help show the connections between the so-called “sight words” kids need to know and the phonics Secrets they need to actually READ them! (I made the video to show exactly how we use it.)

NOT THIS YEAR! I was able to give my students ALL 35 of the first semester words at once.  They immediately noticed that they had the same phonics Secrets in them that were in their names and loved seeing which words they “shared” Secrets with!

I literally spread the pile of words all over our floor and let the kids just walk around and talk about what they saw. The first thing they noticed was which ones had similar Secrets. For example, words like: at, an, and, can, etc… all shared the short /a/ Secret and so they wanted to group them together, just as they’d done with their names. 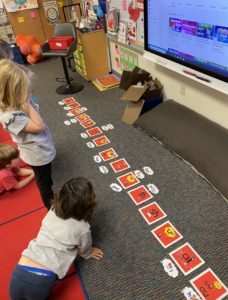 After laying out all of the Secret Stories Flashcards and sorting all the words, we discovered that only 3 of the 35 words actually had to be memorized as “heart words,” as the rest were all easily decodable!

It was so powerful to see these beginning kindergarten readers realize that this giant stack of unknown words wasn’t so scary, as they could already read them!

We continued doing the same sorting activities with these words that we had done with our names before adding them alongside on our Secret Sound Wall. (Note: The names and words were only displayed on our Secret Story sound posters temporarily to illustrate the connection between the Secret phonics patterns and the sounds they make in words. Once these concrete connections between sound and print were made clear, the Secret Stories posters were all they needed to read and spell throughout the day.)

By the end of kindergarten, we’d not only gone through all of our kindergarten words, but first grade’s list too! When kids own the code, kids can read ANY word, regardless of which grade level list they’re on….and that’s why Secret Stories make all the difference! 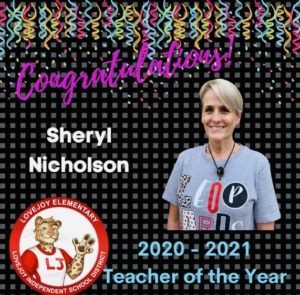 Download this free Secret Stores® Block template from the “Files” section of the Secret Facebook Group, Science of Reading Meets Science of Learning (Just look for the “Files” tab at the top of the group page.) 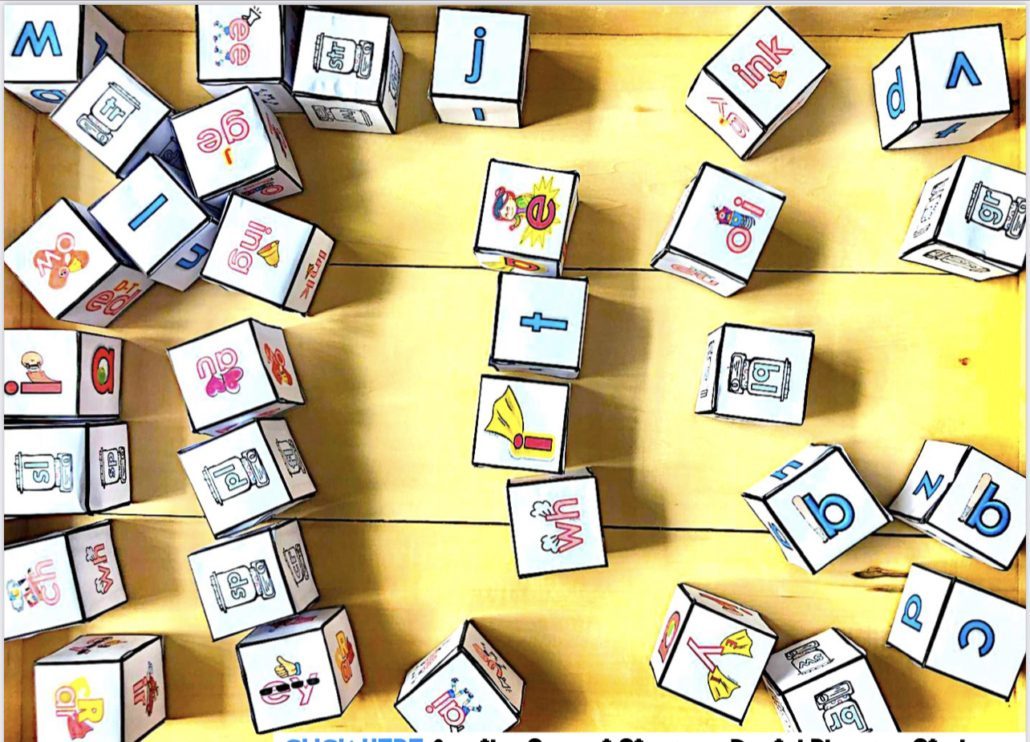